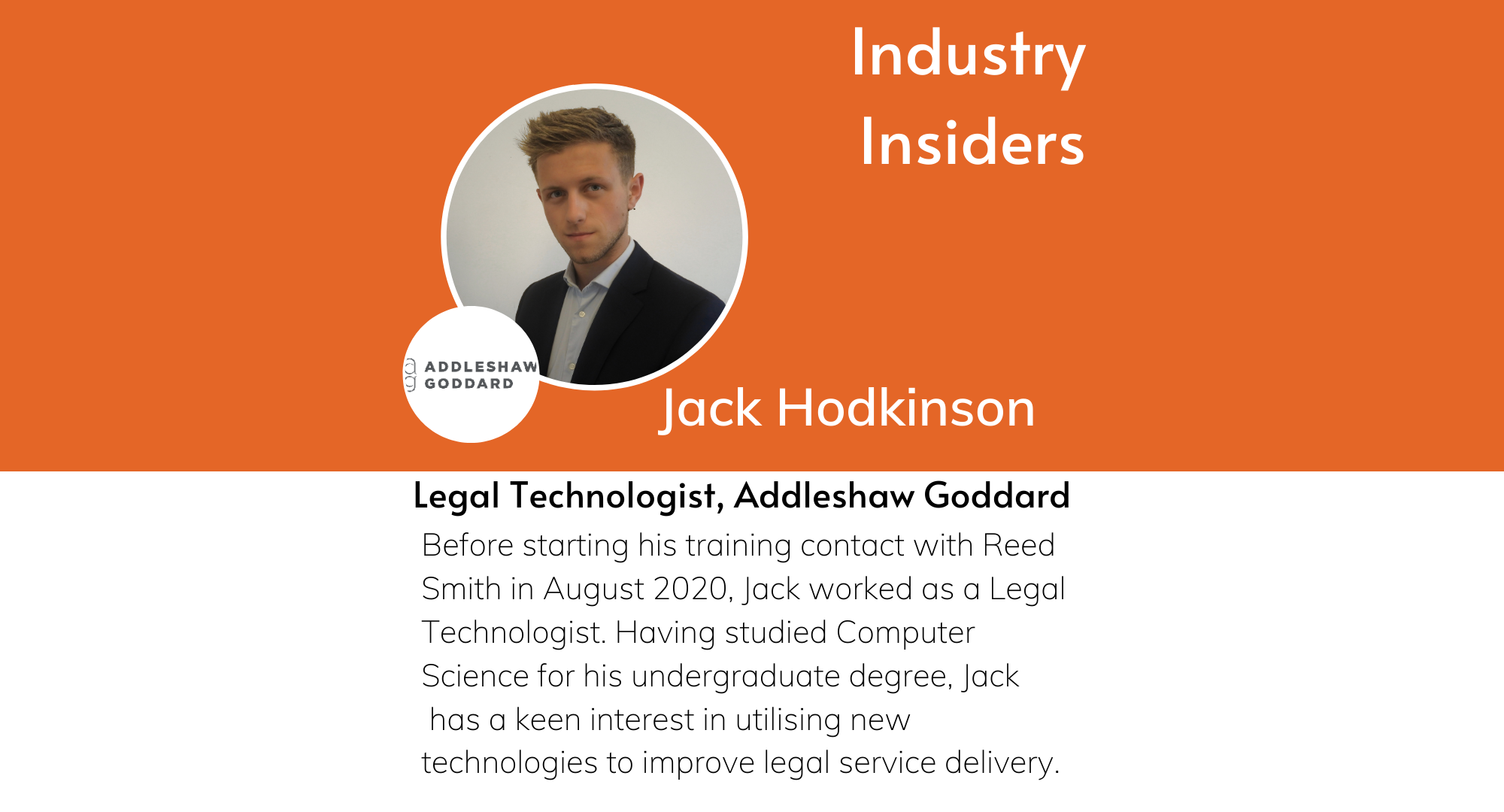 Industry Insiders - The Work of a Legal Technologist

Chris Ireland is joined by Jack Hodkinson, former Legal Technologist at Addleshaw Goddard. He discusses his career journey and provides insight into the work of a legal technologist at a leading law firm.

In this episode of LawTech Industry Insiders, Chris Ireland is joined by Jack Hodkinson, former Legal Technologist at Addleshaw Goddard.

Jack studied Computer Science at Lancaster University before working towards a career in law. During his time at university, he worked in retail as well as undertaking an internship with PwC on top of vacation schemes. He did schemes with both a regional and London firm before accepting a training contact with Reed Smith which he commenced in August 2020. Jack completed his Graduate Diploma in Law with BPP in Manchester and has recently finished his LLM Commercial Legal Practice at BPP in Holborn. At the time of recording, Jack was working within the Innovation and Legal Technology team at Addleshaw Goddard as a Legal Technologist, aiming to blend the line between the technology and legal fields to drive efficiencies within the firm. His role allowed him to utilise the skills from his undergraduate degree and further legal education. Jack is now a trainee solicitor at Reed Smith.

Q. Please introduce yourself and your career journey to date.

I’m Jack Hodkinson and I previously worked as a Legal Technologist at Addleshaw Goddard.

I probably had a more backwards route than people tend to take into legal tech. I did a computer science undergraduate degree and during university did an internship with PwC in technology and data. During the internship, I got involved with loads of compliance stuff there and policy reviews and enjoyed that stream of work more. After that I went off and did some more legal based things around compliance and did every single Open Day I could go to bolster my CV and then did the traditional Vacation Scheme applications and accepted my Training Contract with Reed Smith from that.

After that, at the time, I was working at Tesco part-time and I didn't want to do it anymore. So I literally Googled law firms in Manchester, which is where I was living at the time and just put myself out there, introduced myself to all the firms and their recruiters, and just said if you've got anything that you think would be suitable for me as a paralegal.

Addleshaw Goddard got back to me and said, congratulations, you're through to round two. My current boss saw my CV and said, because of my computer science background, can I meet you instead?

I went in, interviewed and was successful and worked at AG for about two years. A mix of full time and part time when I was in Manchester, but moved down to London, started my LPC.

Q. What does the average legal technologist do?

I think it differs massively across firms.

If I had to distil what I do, it's kind of blurring the line between the tech that is available and the legal knowledge. We work with lawyers and traditional fee earners to distil their knowledge into solutions, whether that's just redesigning by bringing in new technology or your simpler bread and butter things like document automation.

I also do more market research and development style tasks. I've been scanning the market to see if there's anything that's coming up in the legal news that we could use in the firm.

Q. Could you tell us more about the innovation strategy at Addleshaw Goddard?

Yeah. I think firstly, we're quite a large team. I think in total there's about 30 of us, which is on the larger side, but we have a massive variety of people.

So now they are the finance representative within the team and they coordinate all the finance projects. We also have subcommittees from other areas of the business. We have paralegals that come into the team and the lawyers from other divisions that rotate around. This approach aims to get over the adoption challenge of legal tech, we have all these tools and all these bells and whistles, but if nobody uses them, then they are pointless.

I think the work we do is quite broad as well. A lot of firms tend to do client facing work because obviously it's easier to quantify your use if you can say, on this matter, we saved a hundred hours of time and it saved X amount of money. Whereas we try and do the full spectrum. We do client facing work, which is tech enabling matters. At AG, we also build our own products that we can then package and give to clients or sell to clients to help with specific problems.

The final way is internal efficiencies, which is what I focus on. That involves looking within the firm to say, this is what goes on. What can we do better? How could we change the process?

Q. How is a computer science background useful in legal technology?

Firstly, I come at issues from a different angle.

We kind of cross over in the middle and you get a really nice knowledge share. I think where the benefits come from is obviously you understand more of the underlying principles.

When people talk about AI, machine learning, blockchain and all these things, you kind of have a more immediate understanding because I did a module on those at university. It’s understanding the abstract concepts, but I think you also have a more industry focused understanding. For example, if you're working with a client who manufactured microchips or something like that, you would understand how that is put together. But I think where it really comes into it is  your transferable skills, which I know is sort of an application buzzword.

Q. What technology has been most beneficial to the teams at AG?

I think there's a cheesy saying “the best camera is the one that you always have on you”.

I think the best tool is the one that people can use. We've done proof of concepts with stuff at work, and we've sat there as obviously the more tech minded people thinking, "wow, this is really cool or, wow, this is really useful". But when you talk to fee earners, that perception of it is often very different and they would say, "yeah, it has all these bells and whistles, but I really don't need that".

So I think the best tool is one that you can get people to use because a lot of incoming queries, I get say, I have this project. Can we use AI to do this with? Sometimes I reply and say, you can do this with Excel.

I think you need a broad understanding of what your problem is. Even simple things like using HighQ as an online data room can save thousands in postage. I think if I had to pick one tool, it would probably be document automation just because it's very easy to demonstrate its value to a traditional fee earner. You won't have to draft this anymore. You can fill out this questionnaire and they can immediately see the time savings, which really, really helps with adoption. Whereas if you're using tools like Kira or Luminance and things like that, you have to take the time to show its worth.

Q. To what extent, if at all, do you think legal technology should be included as part of the LPC/SQE?

I've finished my LPC now and I did it as a masters with built-in business modules.

I think if you’re doing it as a masters, I can see how it could be incorporated, but I'm not sure how much time you would have just because obviously with the SRA stuff, things are quite regulated and quite regimented by now.

So, I was at BPP and I know that they do a legal technology and design module, which you can just self-study for free alongside your LPC. I think you complete it and you get certificates that you've completed it, but it's optional whether you take it that far. So I think resources like that are really, really helpful because I think it takes you through, for example, it's like a project design data flows testing, and then you get access to HighQ, which is one of the big data room tools that a lot firms use.

I can see why things like that would be useful. But I think probably more useful is just having a general overview of the industry. Because as you said,  innovation differs so much from firm to firm that if you went and did a course on your LPC on how to use certain software, you could go to your firm that you're going to train up and then not use it.

Q. What practical steps do you think students can take to learn about legal tech?

I think when students write about legal tech on application forms, you can get the sense that they don't exactly know what they're talking about. I think including it just for the sake of it isn't necessarily the best way forward.

Before I sort of got into my role. Now I was doing schemes, days, events and literally applied to anything that would take me. Just to try and get some more experience into the industry. I think there's a perception that it has to be a big-ticket event.

You don't have to go to conferences like LegalGeek.

Obviously, it would be great if you could and you were really interested in it, but if you don't have the money to go, there are free things out there.

BPP are running evenings where you can go listen to panels and ask questions. I went to a legal cheek event with Pinsent Masons that was focused on their legal tech and one with Clifford Chance as well.

There are resources out there that are free and are quite accessible. Before I got my job, I was signed up to F-LEX. They aim to recruit students for temporary legal roles but they also hold events.

I think just putting yourself out there and being aware of what's happening can really help. Then with it being such a new industry, there's so much changing and there's always articles about it.

The people within the industry are generally quite open to talking about it. I think for me personally, if someone asked me on LinkedIn and said, I'm a law student, I really like to talk about your role or how legal technology is affecting AG. I'm quite happy to talk about it because I think the key is really just be bold, put yourself out there and keep your finger on the pulse a little bit as to what's happening, both in terms of the technology and events and opportunities. 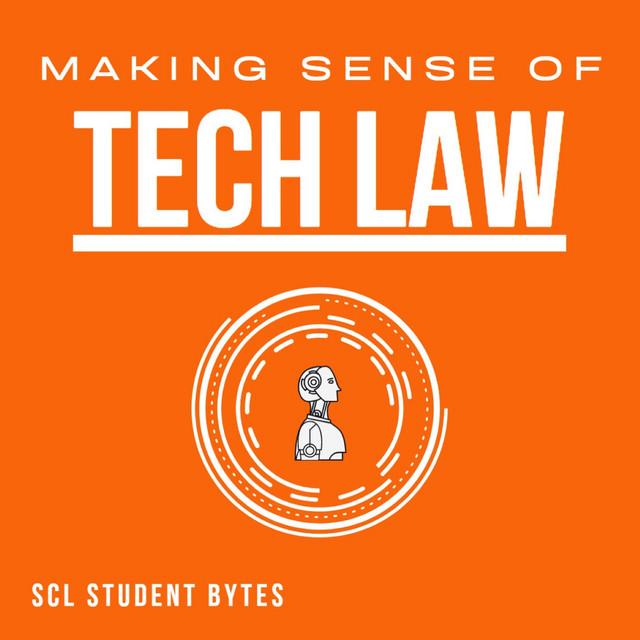 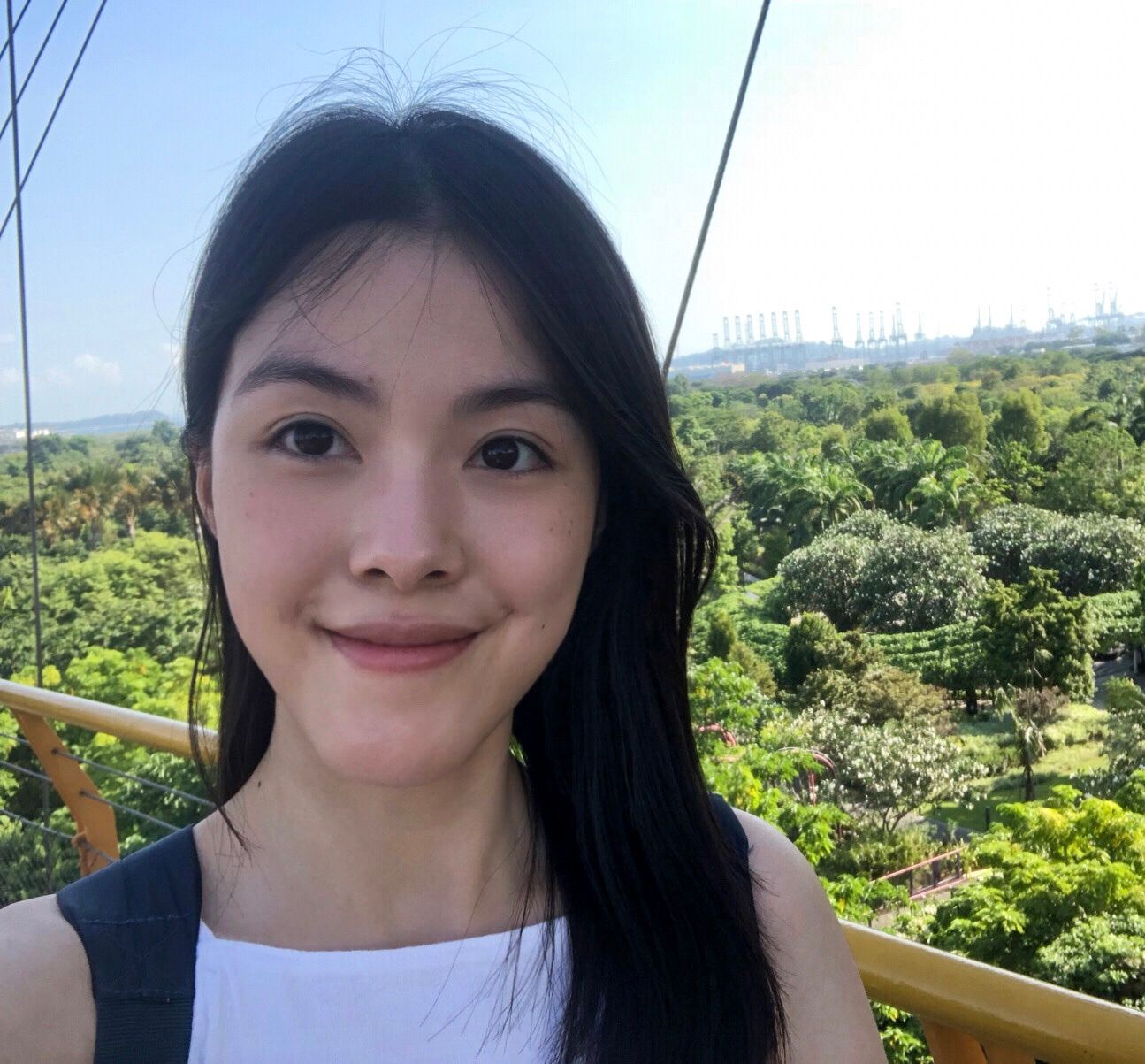